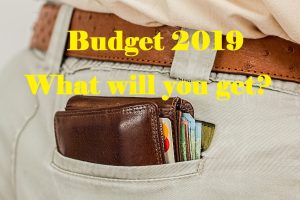 The Aussie Federal Budget was handed down this week – and somewhat earlier than usual.   Our Prime Minister, Scott Morrison states this as “the first budget plus in 12 years.”  Yes, we will all see this is a free election budget as it benefits many.   I’ve broken this up into Business, Individual and General.

Here are the highlights of the 2019 Australian Budget

Morrison’s Coalition Government has pledged to fast track the company tax rate drop to 25%.  This is only going to be open to small and medium-sized businesses that have turnovers of less than $50M.

For Aussie companies, the instant write-off has been increased to $30K.  Again, this is only available to small and medium-sized business who turnover less than $50M.

Additionally, the Coalition Government have allocated new extra funding to the ATO to target tax avoidance by large business, multi-nationals and those who are classified as high-wealth individuals.   Their goal is well publicised; to ensure everyone pays their fair share and certain groups don’t avoid their obligations.

Tax cuts is the big news!   The Morrison Government is also simplifying the tax scale system, cutting back to three tax scales.  Unfortunately for us, this won’t come fully into effect until the 2024-25 tax year.  The Morrison Government have also stated they won’t make the tax cuts law until after the upcoming Federal election.   So basically, once this is passed and in action, we will have three tax scales which will be 19%, 30% and 45%.  I checked the Government website, and yes, we won’t be losing our tax-free component of $18,200.  Whilst I was looking at that site; they state that 24% of Australians earn $37K or less, 70% are in the middle area and the balance 6% are high-income earners.   This will mean that 94% of Australians pay no more than 30% of tax under the new system.

Going by the Australian Governments analysis, and based on the following income levels, this is what Australians can look forward to getting back in their pockets, once the tax cuts are in effect: 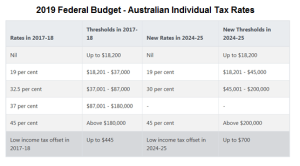 Additionally, the Coalition Government are giving out a once-off amount to go towards electricity bills.  This will be $75 for a single or $125 for a couple.  It’s not for everyone though; only pensioners, disabled people, single parents, carers, veterans as well as their dependents.

For those in their mid-60’s, the Morrison Government have relaxed 65 and 66 years old regarding making voluntary super contributions.  Both 65 and 66 year olds won’t be requested to meet the existing works test.  This will commence from 2020-21 year and is anticipated to benefit 55,000 people.  This same group will be also allowed to make three years’ of non-concessional contributions (currently capped at $100K per year) to their super funds in any one year.

The Government intends to increase age limits for contributions relating to spouses – moving from the current 69 up to 74.   At the moment, those over 70 years old can’t receive any contributions made by another on their behalf.

Good news for youth and business – and Australia, generally, as it is sure to open up job opportunities.   There is an additional $525M skills package which contains an extra $55M of extra funds (plus the unspent money of $463 million from the Skilling Australia’s Fund).   There will be $200M for apprenticeship incentives for trades with skill shortages.   There is also $67.5M to trial 10 national training hubs for vocational education which is school-based.  Plus, there’s $62.4M for literacy and numeracy skills.  Finally, in this segment is an allocated $20M to identify emerging skill requirements and where the gaps and shortfalls might come up in the future.

This budget was dubbed “Back in Black” (akin to the ACDC tune?).  The Scott Morrison Coalition Government states that the net debt will be eliminated by 2030.  That is if that Government stays in power.  Who knows what a different Government will bring in, action or take back?  It’s said that this budget has the biggest tax cuts since possibly the Howard Government.   In doing my research and reading the experts’ comments, it really does look like the average Australian will be better off from the outcomes of this budget.

Donna Stone is a business coach with three decades of experience. She grew her own business from a garage to be a multi-award winning operation that spanned five locations nationally. For almost a decade she has been sharing this knowledge and expertise with clients to guide them in their own success. Donna works with business owners and other business coaches, consultants and trainers to help them build their own success. Her Coach the Coach ™ program has proved exceedingly popular, as has her life coaching services. Donna is a prolific writer with hundreds of articles written and seven books published. Visit www.donna-stone.com.au.

Tips on Handing Over a Business Once You Have Sold It
January 10, 2022