Businessmen are From Mars Too 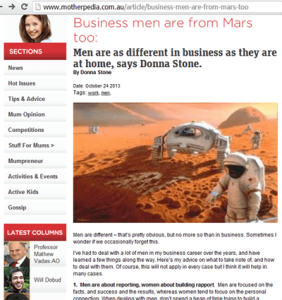 Men are different – that’s pretty obvious, but no more so than in business. Sometimes I wonder if we occasionally forget this.

I’ve had to deal with a lot of men in my business career over the years, and have learned a few things along the way. Here’s my advice on what to take note of, and how to deal with them. Of course, this will not apply in every case but I think it will help in many cases.

As I said, we are different in many ways and whilst a female will likely see female traits as better, there are some definite advantages of working with men (and I am trying to keep it G-rated).

While statistically 65% of new businesses are being started by women, the male component of people in business is a high proportion – so work out how a man ticks and talk his language, walk his walk and you will get the most from the business relationship. I’m not saying change who you are, just understand who HE is.

Donna Stone is a business coach with three decades of experience. She grew her own business from a garage to be a multi-award winning operation that spanned five locations nationally. For almost a decade she has been sharing this knowledge and expertise with clients to guide them in their own success. Donna works with business owners and other business coaches, consultants and trainers to help them build their own success. Her Coach the Coach ™ program has proved exceedingly popular. Donna is a prolific writer with hundreds of articles written and six books published. Visit www.donna-stone.com.au.

Tips on Handing Over a Business Once You Have Sold It
January 10, 2022